Beyond Yellowstone: 10 National Parks That Fly Under the Radar

The national park system is America’s great ecological undertaking—an effort to preserve the country’s beautiful landscapes and historical buildings and invite visitors of all nationalities to explore them. From sprawling landscapes like Yosemite to compact educational experiences like Independence Hall, there is a national park experience to suit your tastes. While famous sites such as Yellowstone and the Grand Canyon welcome millions of annual visitors, there are numerous parks throughout the United States that are equally stunning and can be toured without crowds. These are 10 undervalued national parks sure to give international travelers an iconic American experience. 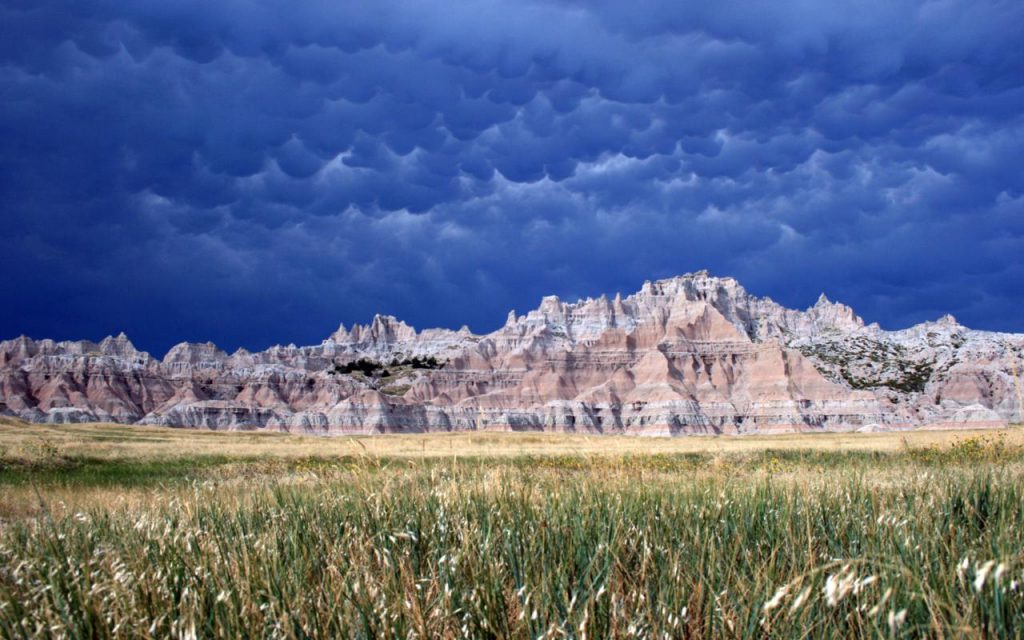 Named for sharply eroded buttes and muted colors of its sawtooth ridges, this stark landscape has been home to the Lakota people, homesteaders and prospectors fruitlessly seeking riches in the mysterious canyons. Today the park contains the largest undisturbed mixed grass prairie in the United States and has become a magnet for geologists and paleontologists who seek answers from the buttes’ exposed rock layers. You can learn about their discoveries at the Ben Reifel Visitor Center, whose paleontology lab includes preserved saber-toothed cat fossils. Next, venture outside for a drive on Badlands Loop Road, which passes over the valleys’ edges to provide stunning views of the undeveloped landscape. Weather permitting, you can also venture into the ravines themselves on the Saddle Pass and Medicine Root Trails. 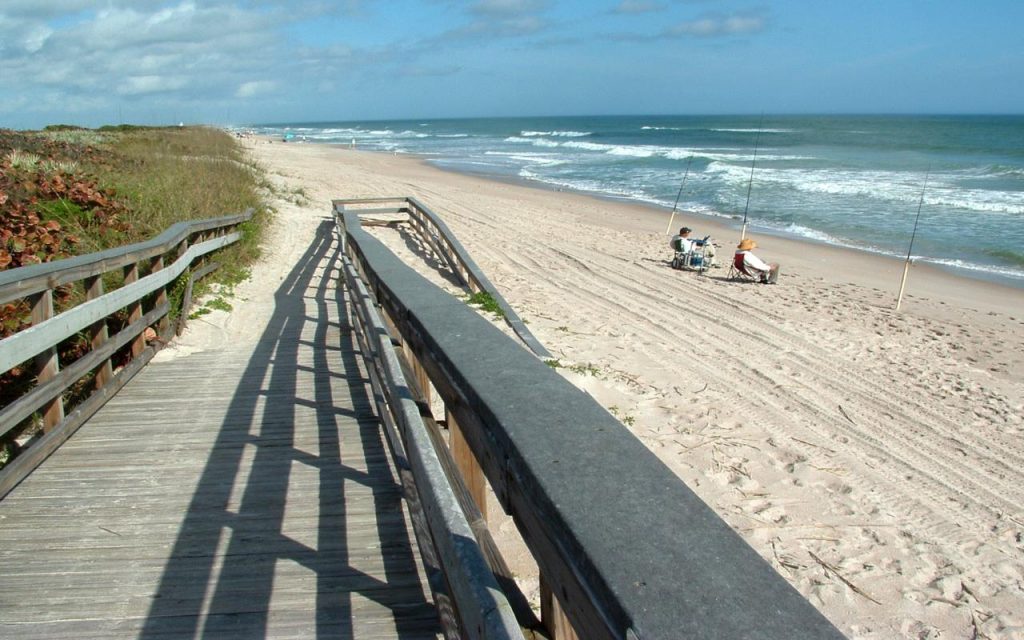 North of the Kennedy Space Center are 25 miles of unspoiled barrier beaches that play host to alligators, manatees and birds to rival the much busier Everglades for wildlife variety. A barrier island that stretches the length of the park forms the pristine Mosquito Lagoon with the opposing Florida shore, and the result is a body of water where rare tropical birds flock and visitors can swim in tranquil waters separated from ocean currents. Two popular beaches bookend this protected shoreline: Apollo Beach on the northern end and Playalinda Beach at the southern tip. Both offer swim zones, fishing opportunities and trails. Located on the subtropical “frost line,” the park contains a unique mixture of temperate and tropical species like blue crabs and sea turtles, who build up to 7,000 nests every summer along the beach.

When president Thomas Jefferson assigned Meriwether Lewis and William Clark to explore the American West in 1803, they eventually reached the Pacific Ocean on the spruce-lined shores of the Columbia River. It’s here at the river’s mouth where they established shelter for the winter and comprehensively catalogued local wildlife, and the area forms the modern border between Oregon and Washington. A collection of national and state parks lines the basin, most notably Lewis and Clark National Historical Park. History bus will want to visit notable sites such as Fort Clatsop, the last encampment made by the expedition before its return to St. Louis, and Dismal Nitch, the group’s last campsite before setting eyes on the Pacific. Self guided audio tours are available for the area, and warm-weather months see the park populated by historic reenactors who can explain the area’s past as a furtrading and military outpost. 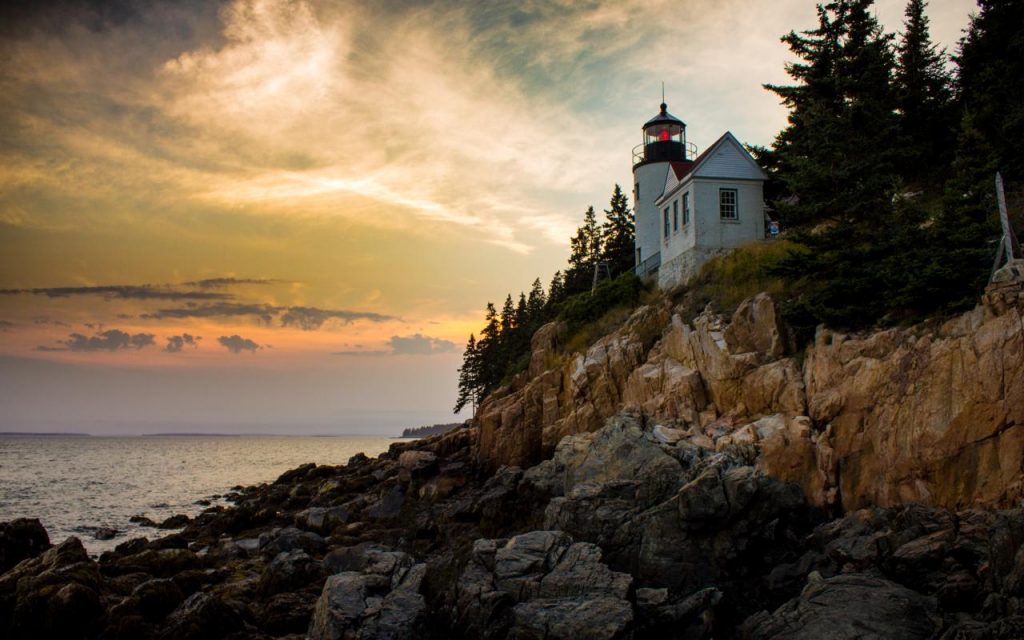 The juxtaposition of craggy rock beaches and quaint New England architecture defines this coastal national park in northeastern Maine. A majority of the park lies in Mount Desert Island, a rugged landscape of granite peaks and spruce woods created from centuries of erosion and crashing North Atlantic waves. Discovered by explorer Samuel de Champlain in 1604, the island was included in the French colony of Acadia but remained undeveloped due to its isolated location. Today, the park retains its pristine form, and you can walk through the same pine forests where 17th century French Jesuit priests prayed. The 27-mile Park Loop Road grants access to most of the park’s highlights, including Bass Harbor Head Light lighthouse and Cadillac Mountain, the tallest peak along the eastern U.S. coast. For a nautical excursion, brave a choppy cruise to the Isle au Haut (“High Island”). Here, rugged lookout points offer beautiful views of Penobscot Bay and Duck Harbor. 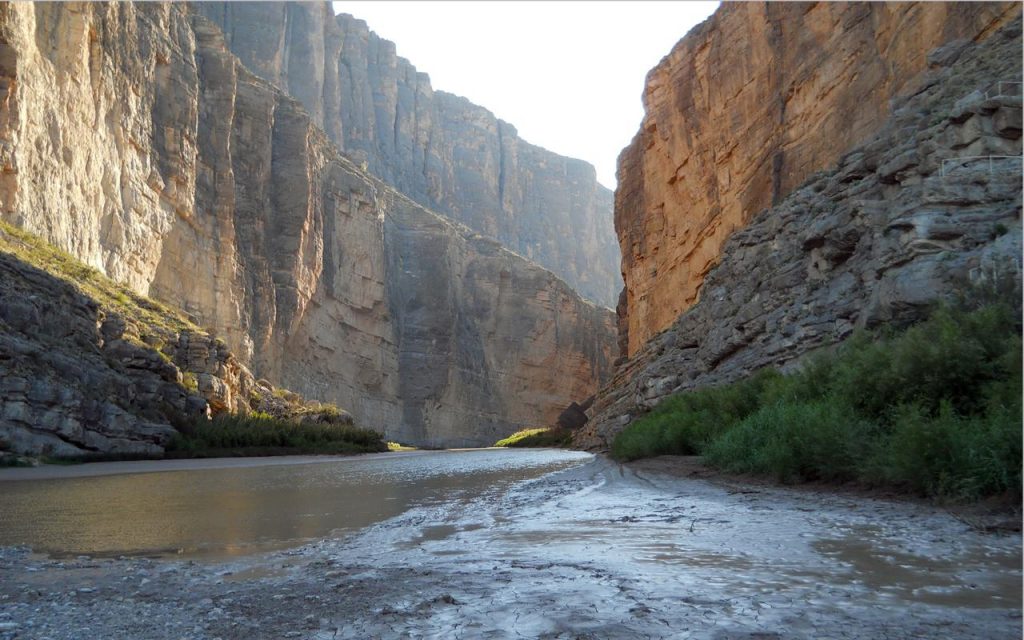 Formed over millennia by the Rio Grande’s water erosion, the stunning canyons of this park on the United States-Mexico border are considered the last true wilderness of Texas. It’s here you can admire the 1,500-foot-tall walls of Santa Elena Canyon, spot hundreds of desert lower species and stargaze near the rugged Chisos Mountains. The park is divided into distinct areas that can cater to your group’s interest, and each includes a visitors center to help orient you. Adventurous travelers should consider a float trip down the Rio Grande itself, which passes through canyon walls so tall no sunlight passes through and along sweeping riverbanks with views of Mexico. Campsites are conveniently spaced along the river’s edge, and local outfitters can supply you with watercraft and shuttle services. For a less rugged experience, stop by the Chisos Basin Visitors Center, a central hub for hiking trails that spread throughout the entire park. For a panoramic view, embark on a switchback day hike to Emory Peak or take the Pine Canyon Trail through an untouched piñon-juniper forest. 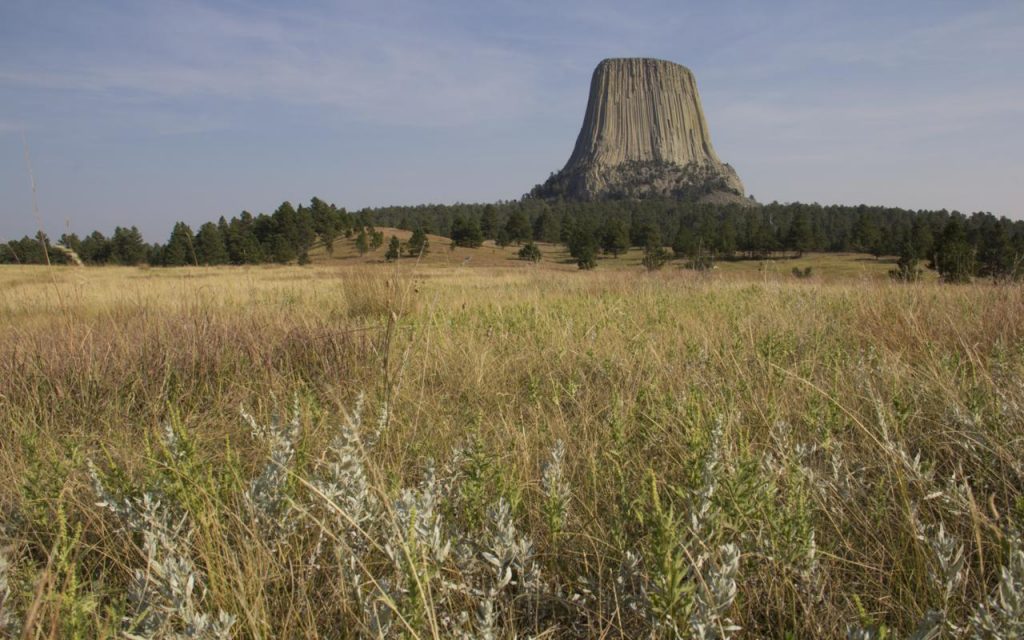 It’s appropriate that spaceships famously descend upon this enormous butte in Close Encounters of the Third Kind—its size and features are positively alien. Rising 1,267 feet above the Belle Fourche River, this enormous monolith resembles a colossal stone tree stump. The native Lakota people believed its distinct ridges were created from an enormous bear clawing at its walls, and geologists have failed to conclusively prove how it was formed, which only adds to its mystery. Ambitious travelers can climb and repel of the monument on select days, while casual admirers can walk the 1.3-mile trail that surrounds the tower. Other trails pass over Joyner Ridge and to Prairie Dog Town, one of the largest North American colonies of the adorable rodents. If your group plans on staying past sundown, consider a night of stargazing. Rangers offer programs throughout the year to point out Lakota constellations and celestial bodies only visible from Devils Tower’s isolated Northeastern Wyoming location.

Craters of the Moon National Monument 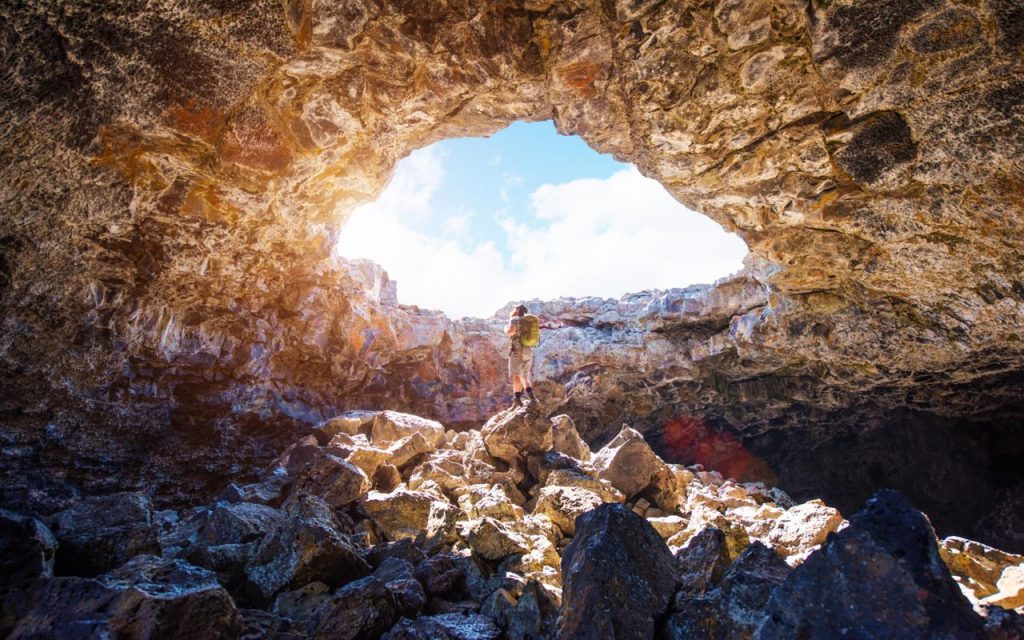 Craters of the Moon National Monument

The Windblown flats and rust-colored mounds of this national park oer a stark beauty unlike any other. The area’s iconic mounds were formed 15,000 years ago when fountains of molten, gas-charged rock shot above the surface and hardened, while its deep rifts are the result of weakened fissures in the Earth’s crust. The 1,100-square-mile park is impossible to comprehensively explore on a short visit, but your priorities should include the Blue Dragon Flow, a preserved basalt deposit that retains its striking cobalt color; Boy Scout Cave, a lava tube tunnel that features an ice floor even in the summer; and Big Cinder, one of the world’s largest cinder cones at 700 feet. Scattered throughout these areas are kipukas, isolated islands of remnant vegetation that flourished when the lava flows were fresh but now survive as undisturbed havens for rare plant species. The park also boasts numerous opportunities for winter activities, such as cross-country skiing through Loop Drive and snowshoeing around the cinder cones. 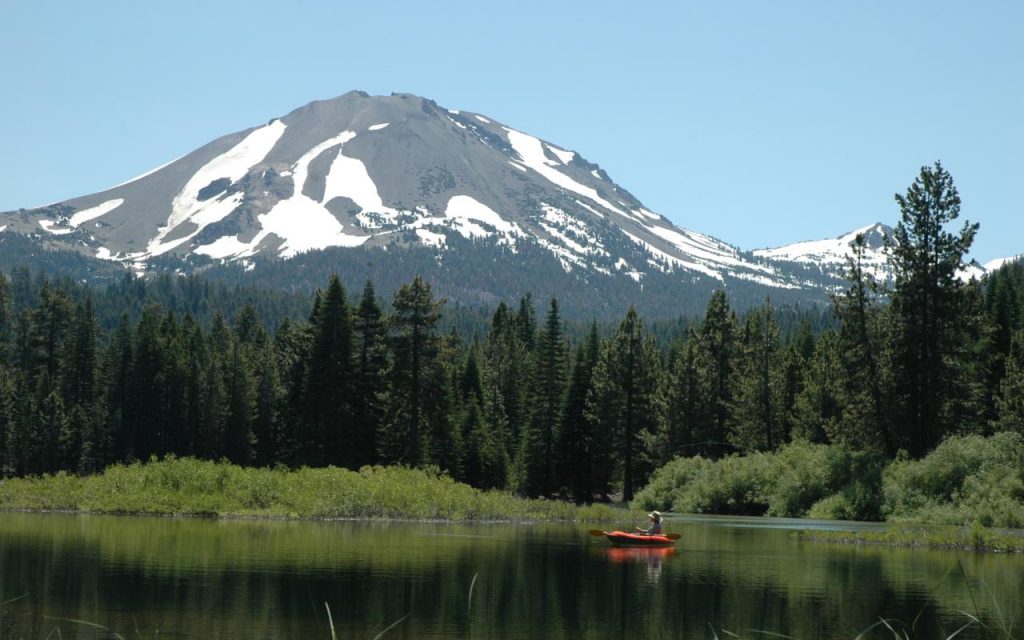 High above the peaceful Sacramento Valley of Northern California lies an ancient landscape of boiling mud pots and fumaroles. This extreme region of the Cascade Mountain Range is Lassen Volcanic National Park, a world of jagged craters and sulfur formed by Lassen Peak’s prehistoric lava flows. Fortunately, the mountain isn’t scheduled for an eruption in the near future, so you’re free to trek through the 150 miles of hiking trails that pass through hydrothermal areas like Bumpass Hell and Devils Kitchen that sit on fissures of trapped volcanic heat. For a more placid experience, rent a watercraft to float on Manzanita Lake and view the stunning Chaos Crags Range, or embark on a ranger-led tour to learn about the Atsugewi people who thrived in this harsh environment for centuries.

Forty years before Yellowstone was declared the first national park in 1872, the federal government was protecting the precious geothermal resource surrounding the town of Hot Springs: water. Beginning as rain and slowly purified through mineral pores for 4,000 years, the spring water clears skin, relaxes muscles and stabilizes breathing. Wedged between several Ozark plateaus, the city of Hot Springs has been visited by generations of serenity seekers, and your group can join the thousands of annual visitors who relax in the mineral water that flows from the mountainside. Most of your time will be spent in Bathhouse Row, a grand collection of masonry bathhouses constructed in the early 1900s to service the wealthy East Coast families who visited the area. Today, the bathhouses are open for anyone, and they provide opportunities to soak in a pool or indulge in a massage. Architecture lovers should tour the Fordyce Bathhouse, an elaborate building filled with marble, stained glass and ceramic fountains. The park also includes several outdoor opportunities in the surrounding hillside, including 26 miles of hiking trails and rental lots at the Gulpha Gorge Campground. 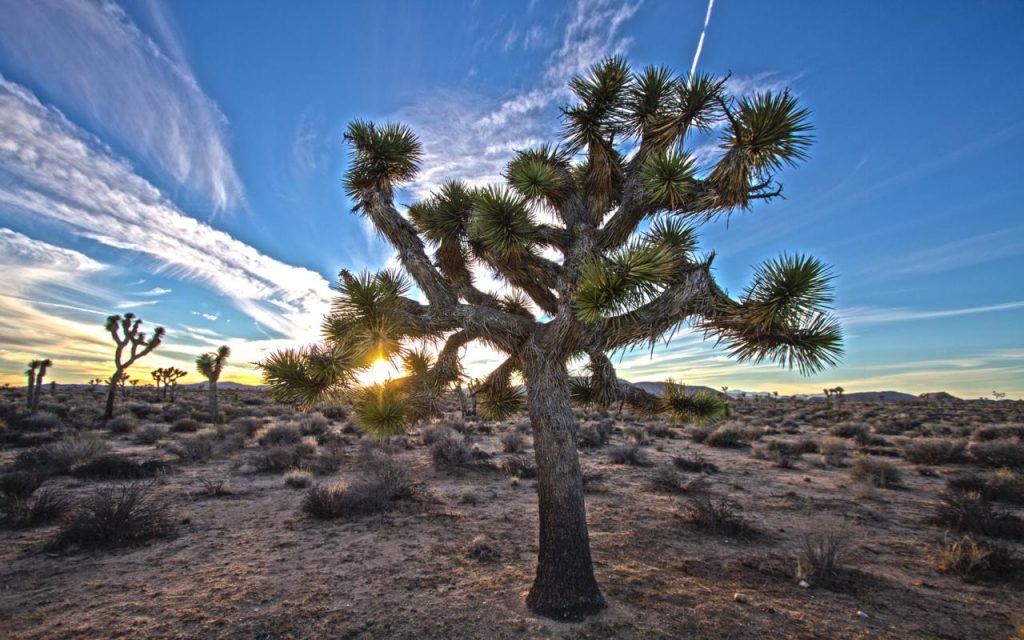 A world away from the nearby Los Angeles sprawl, Joshua Tree lacks centralized activities or lookout points and is instead best appreciated if you wander through its vast desert landscape. Named for the yucca plant native to southern California, Joshua Tree is bordered by outfitters who can prepare you for a backpacking trip to the park’s interior. On your way, you can spot Coachella Valley, the Baja Mountain Range and cacti species that provide a rare splash of color. The roads also accommodate mountain bike groups and horseback riders, while various outcroppings throughout the park are ideal for rock climbing.
-Miles Dobis