National Parks such as Yellowstone and Yosemite have drawn international visitors for over a century, but their natural beauty can be compromised by throngs of holiday travelers. Fortunately, the National Park Service also oversees 87 National Monuments—preserved sites of geological or historical interest that boast just as many amenities and ranger services as the nation’s parks. Also welcoming to international guests are America’s state parks. Over 10,000 of these areas dot the American landscape and feature everything from placid lakeshores to sprawling mountain ranges, and they often provide lodging and services at lower rates than what their National Parks counterparts charge. IITA is spotlighting nine National Monuments and state parks that showcase America’s beauty from coast to coast, and they can all be easily integrated into itineraries that cover larger metro areas. 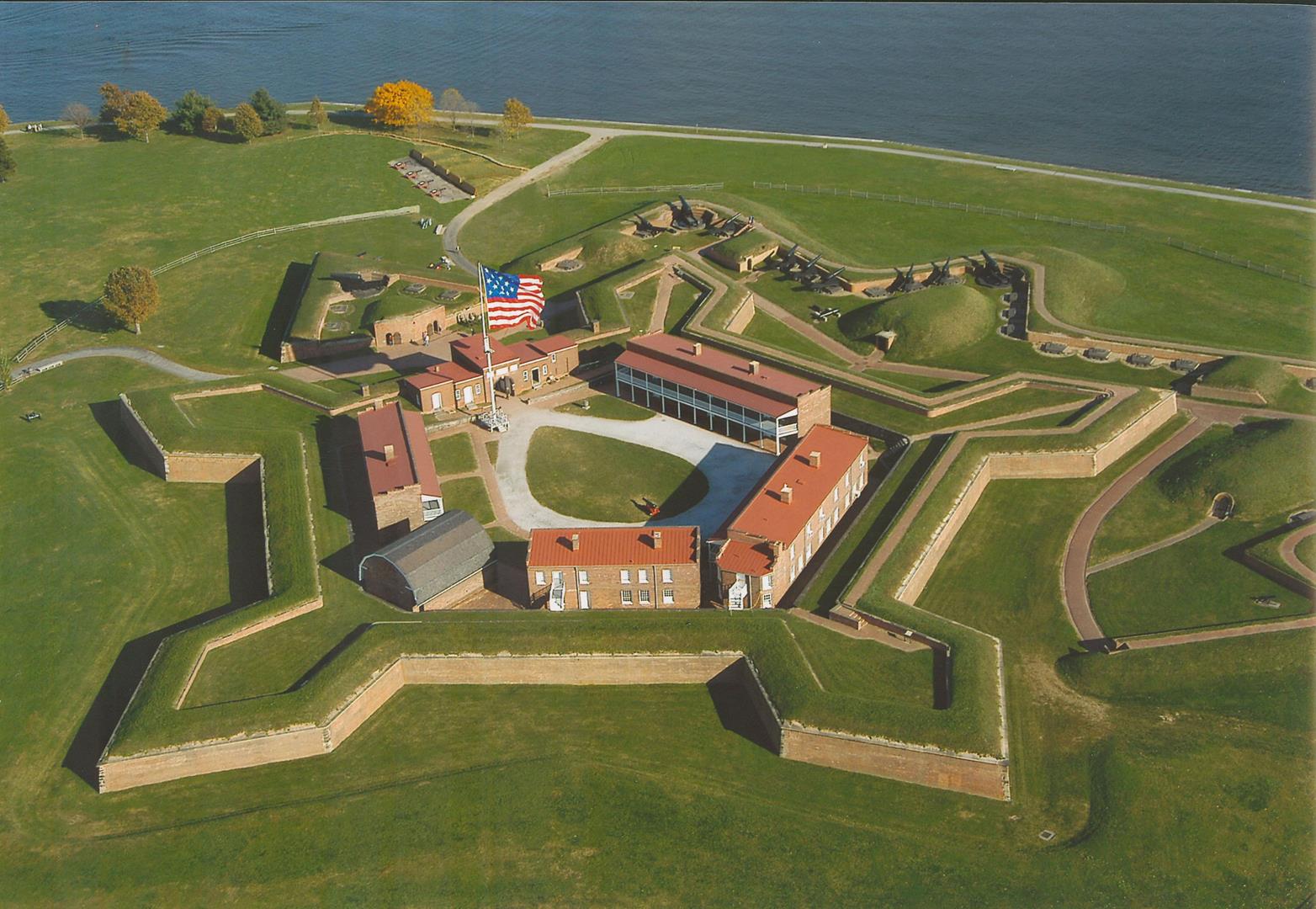 During the war of 1812, Fort McHenry defended the Baltimore harbor and stopped a British advance into the city. Surrounded by water on three sides, the brick fort was far enough from Baltimore to provide protection without endangering the city. It was the valiant defense of the fort by 1,000 Americans that inspired Francis Scott Key, a lawyer and amateur poet, to compose “The Star Spangled Banner,” originally entitled “Defense of Fort McHenry.” An excellent complement to a Baltimore itinerary, this area is open to the public year-round and offers a fascinating look into American maritime and flag history. Begin at the visitor center, which features films about the War of 1812, preserved weapons and interactive exhibits that demonstrate the design development of the American flag. Continue to the star-shaped fort to walk the battlements, explore refurbished officers’ quarters and witness a flag raising or lowering. 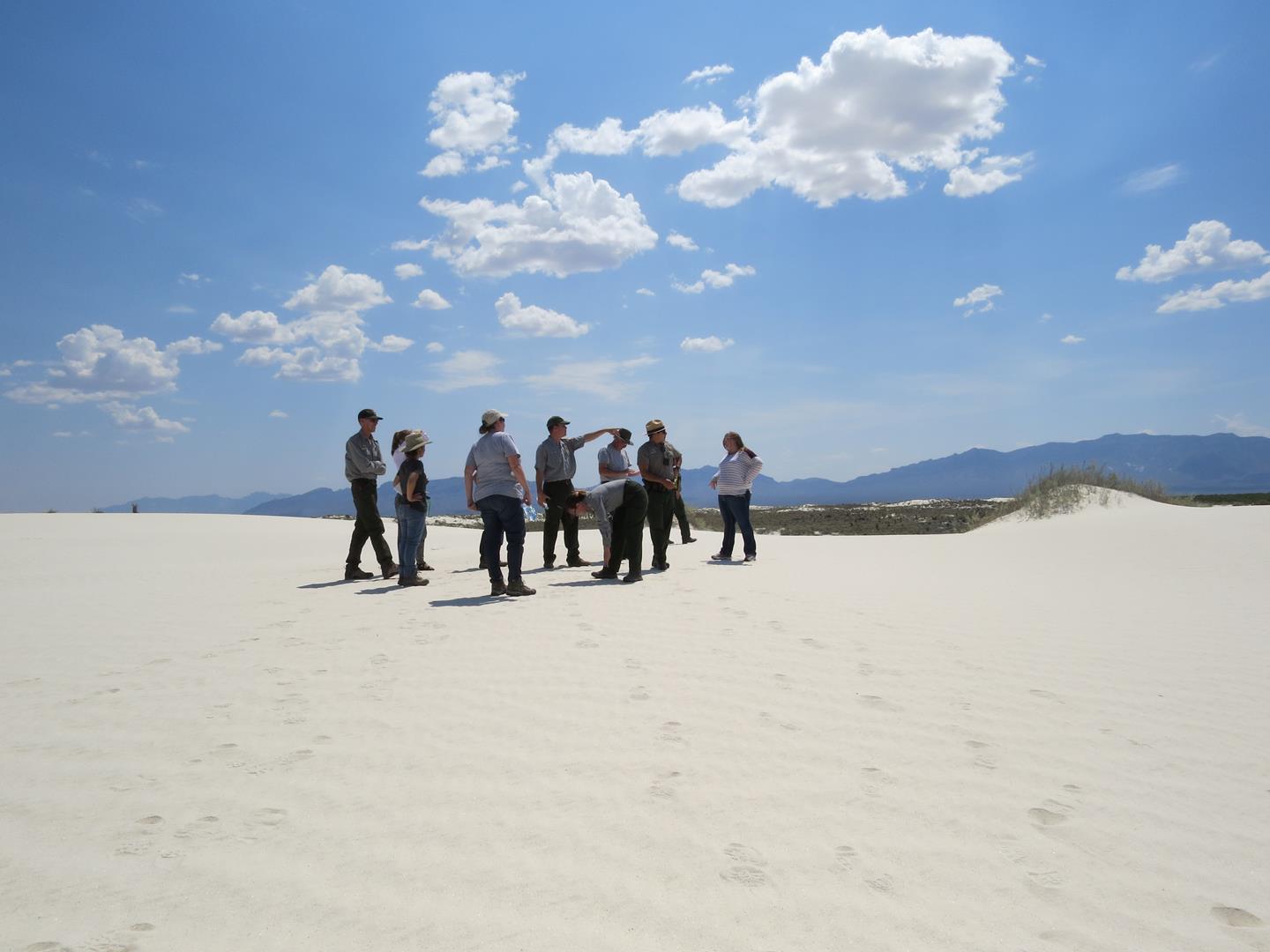 Awash with sunshine all year round, New Mexico’s White Sands are an eerie landscape of undulating dunes in the northern mountain-ringed basin of the Chihuahuan Desert. Upon closer inspection, these dunes consist not of sand but of gypsum that was deposited here millions of years ago when this area was a shallow sea, and it remains the largest gypsum dune field on Earth. Federally protected since 1933, this area is also famous for the Trinity Site, where the first atomic bomb test was performed in 1945. Orient yourself at the Pueblo Revival visitor center, which oversees a peaceful garden of desert plants and is staffed by rangers who can offer hiking or horseback excursions. Adventurous groups should try White Sands’ most iconic activity: sledding. No winter clothing is required to fly down the dunes, whose powdery gypsum is conductive for the traditionally cold-weather sport. Waxed plastic snow saucers can be purchased at the gift shop, aequipment to travelers.

The Rocky San Juan Islands, which reside on the Salish Sea between Vancouver and Seattle, have been traversed over the centuries by herds of rare wildlife, the Coast Salish indigenous peoples and British and American soldiers who established camps there in 1859. The landscape is dotted by lighthouses built by early European settlers, schools of playful dolphins and coastlines of pristine spruce trees ideal for hiking. Designated a National Historical Park in 2013, this area covers 75 separate sites and offers experiences for nearly every taste. Orient yourself in Friday Harbor, the island’s largest town and site of the American Camp, where United States soldiers served peacefully during a 12-year co-occupation of the island with British forces. Adjacent to the camp on the Strait of Juan de Fuca are biodiverse tide pools and a coastline rich with rare aquatic species that are available to tour with local naturalists. The island also offers raptorwatching expeditions, scenic sunset lookouts and beautiful stargazing opportunities available on Young Hill. Adventurous visitors can also experience some of the best kayaking in the Pacific Northwest, with endless inlets and rocky shorelines to explore. 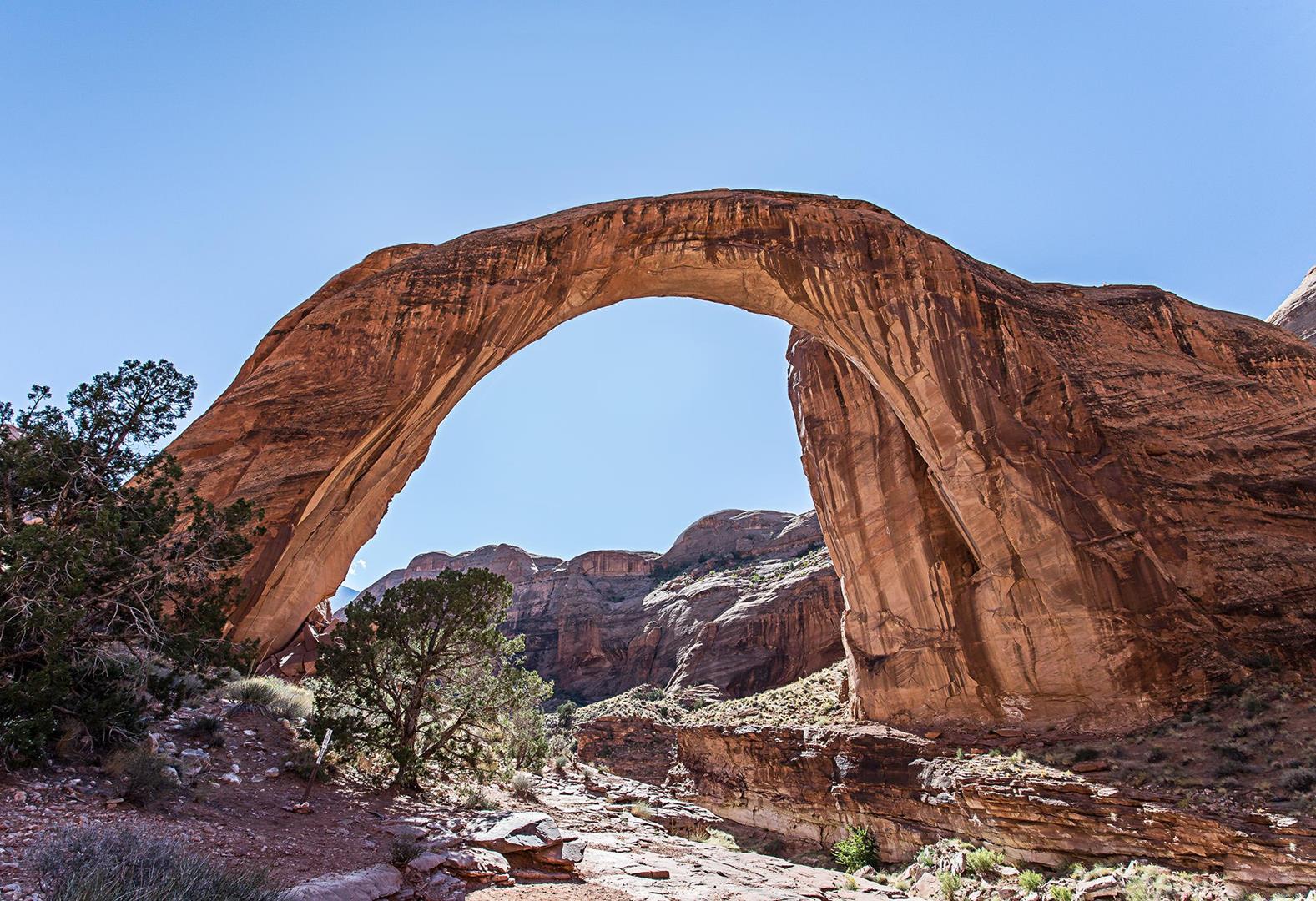 Overshadowed by Better-Known Arches National Park in the public imagination, Rainbow Bridge National Monument matches those natural landmarks in scope and harsh beauty. Located in the Glen Canyon Recreation Area in southern Utah, the largest natural bridge is 234 feet tall and was held in sacred regard among native Pueblo people. The monument was formed by hyper-condensed sandstone distributed when this area was once a vast ocean, and ancient ice age rivers dried up to create the stunning valleys that remain. The area can be accessed by a two-hour boat ride across Lake Powell. From there, visitors can embark on a rocky one-mile hiking trail from National Park Wharf to take in one of America’s least-visited natural landmarks. 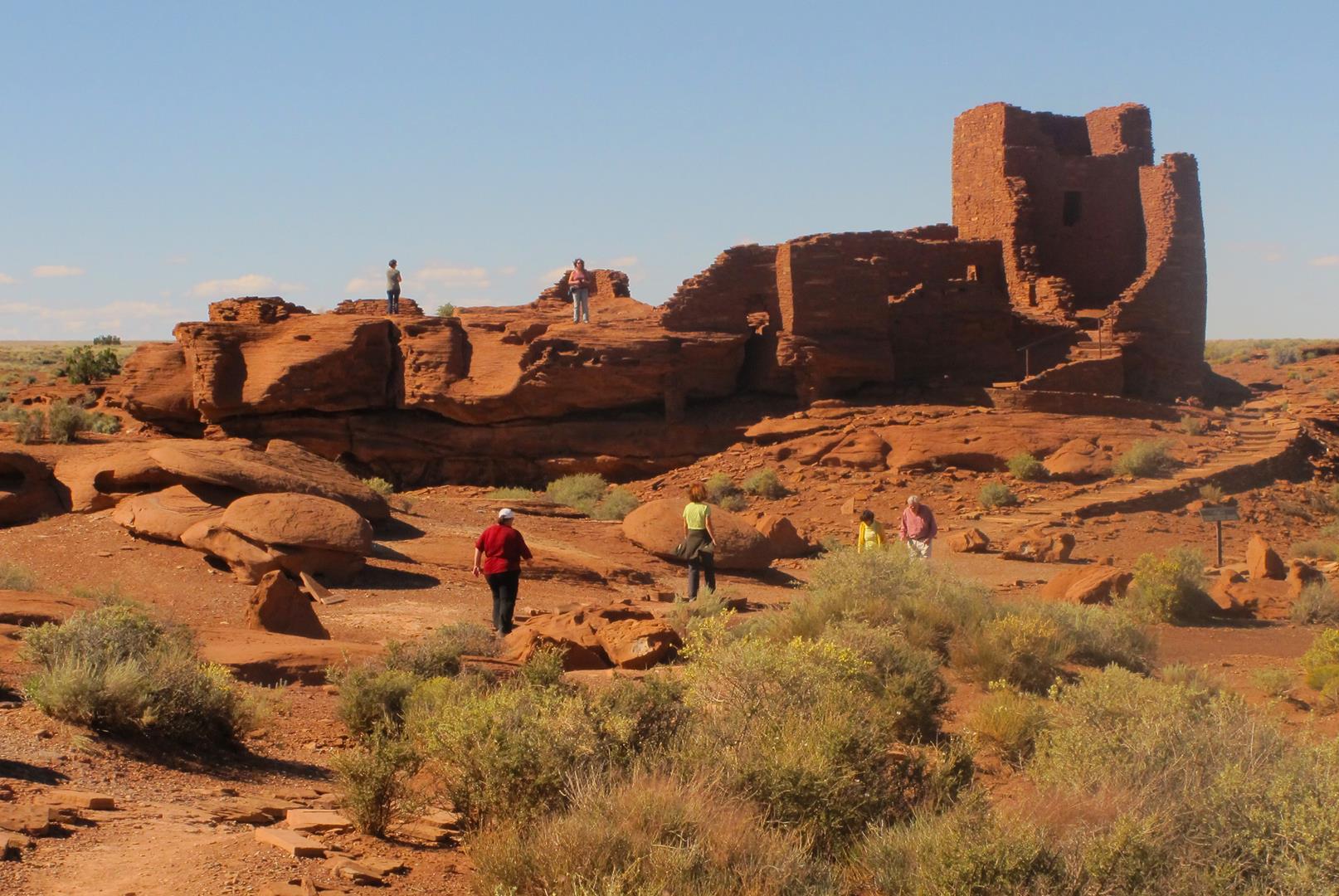 It May Seems Difficult to believe, but a thriving civilization once occupied the harsh Painted Desert near Flagstaff, Arizona. While the Ancient Pueblo people have long since left this region, their incredible handiwork remains in Wupatki National Monument, a collection of ruins that retains the rich history of Southwestern Native American culture. Wupatki, which means “tall house” in Hopi, makes for an excellent complementary experience to the Grand Canyon, which is less than 90 minutes away. Visitors are free to hike through the ruins or register for an interpretive tour, in which a park ranger discusses Pueblo traditions and the park’s proximity to the Sunset Crater. The monument’s largest structure Sinagua Pueblo contains over 100 rooms, a community center and ball court, and it remains the largest building for 50 miles. Other structures available for exploration along Loop Road is the Citadel (where soldiers kept watch atop the hill) and Wukoki Ruins (where visitors can climb the tower). 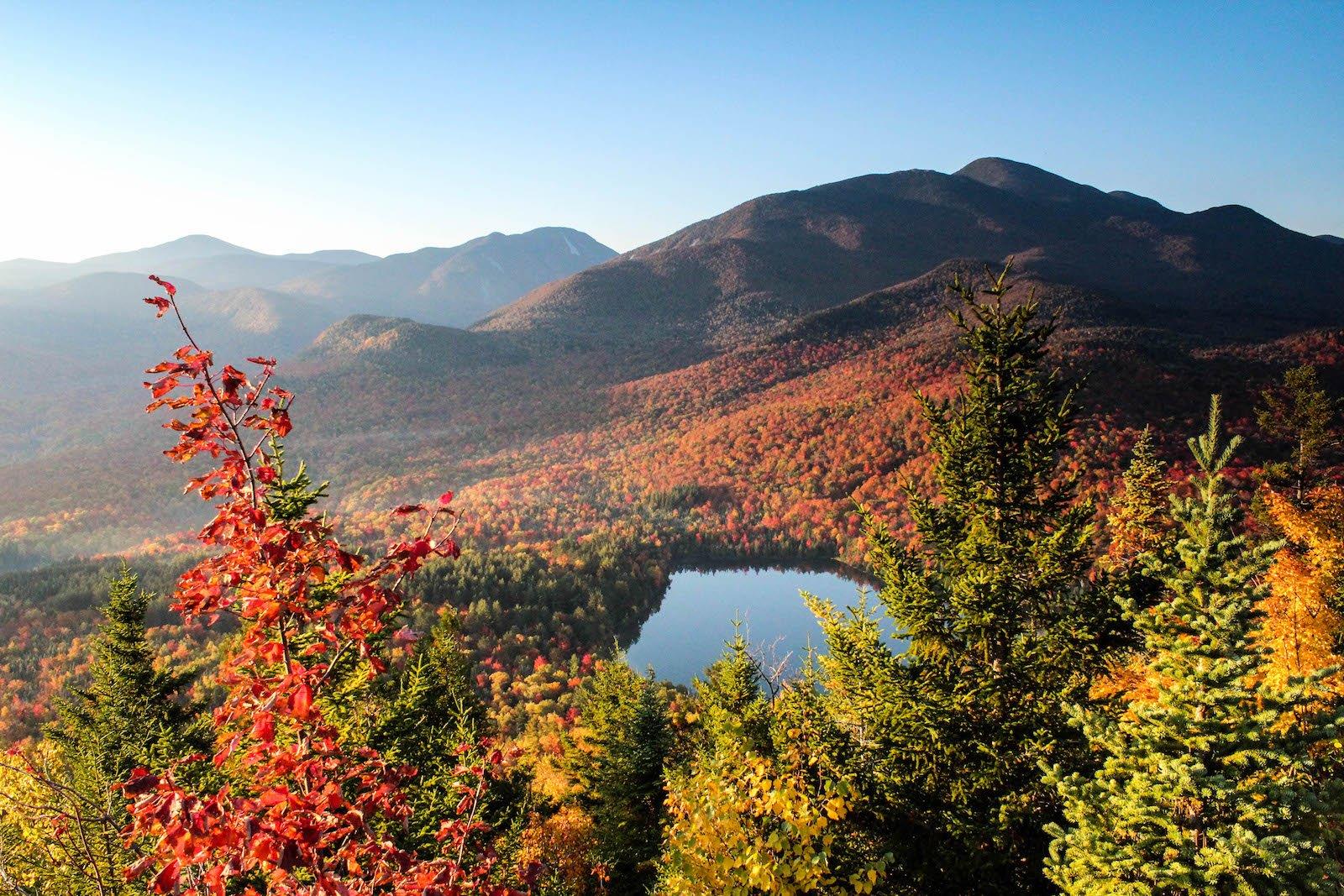 Ammerica’s Largest State Parks spans over six million acres and covers more area than Yellowstone and Yosemite combined. Encompassing 102 towns, 46 mountain peaks, over 3,000 lakes and 30,000 miles of rivers, this sprawling region in upstate New York can accommodate nearly every outdoor activity imaginable. It’s impossible to experience everything in the Adirondacks, so make sure to orient yourself at one of the park’s two interpretive centers: Paul Smith’s College Visitor Interpretive Center (where visitors can embark on naturalistled canoe trips on Barnum Pond) and the Newcomb Center (which oversees several miles of cross-country skiing trails in the winter). The area’s quaint towns are tucked amongst the valleys and rolling Mountain ranges, and they welcome visitors with everything from quaint bed-andbreakfasts to large conference centers. Ideal huband-spoke villages include Lake Placid (which twice hosted the Winter Olympic Games and offers several venues for touring), Lake George (home to Fort William McHenry, immortalized by James Fenimore Cooper’s The Last of the Mohicans), and Saranac Lake (where locals construct an enormous Ice Palace during the annual Winter Carnival). Want to take a break from hiking and participate in a tour for local products? The region offers numerous wine, maple syrup and craft beer trails for you to indulge in. 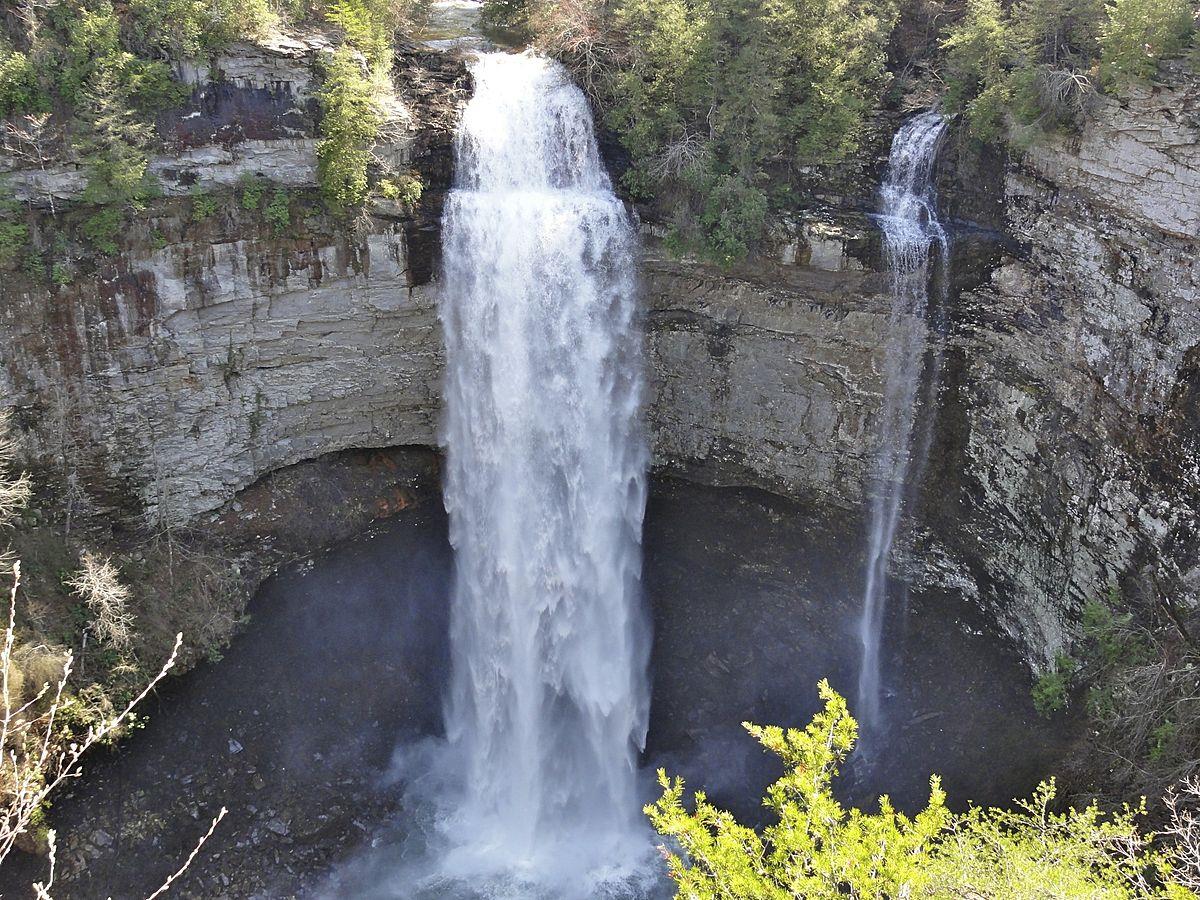 A Bounty of Outdoor activities— including golf, swimming and hiking—can be found among the craggy cliffsides and ambling glens of one of America’s most accommodating state parks. Named for the tallest free-fall waterfall east of the Mississippi River (at 256 feet), this landscape on the far end of the Cumberland Plateau is conducive to multi-day excursions, with cabins, campsites and an inn all available for groups of any size and budget. The campus includes a conference center, 18-hole golf course and Olympic-sized swimming pool, while visitors seeking a more rugged experience can hike through the Rumbling Falls Cave—the second-largest in the United States after Mammoth Cave. The park includes 56 miles of trails of various intensity (so visitors can pass through numerous overlooks and waterfalls), a fleet of watercraft to rent (which includes paddle boats, canoes and kayaks) and an interpretive center with a variety of nature and ecology programs for guests of all ages. Looking for a forest canopy adventure? Swing through the woods on the park’s elaborate zip line course, which takes over two hours and includes over 70 balance beams, wobbly bridges and rope swings to provide both a different perspective and full-body workout. 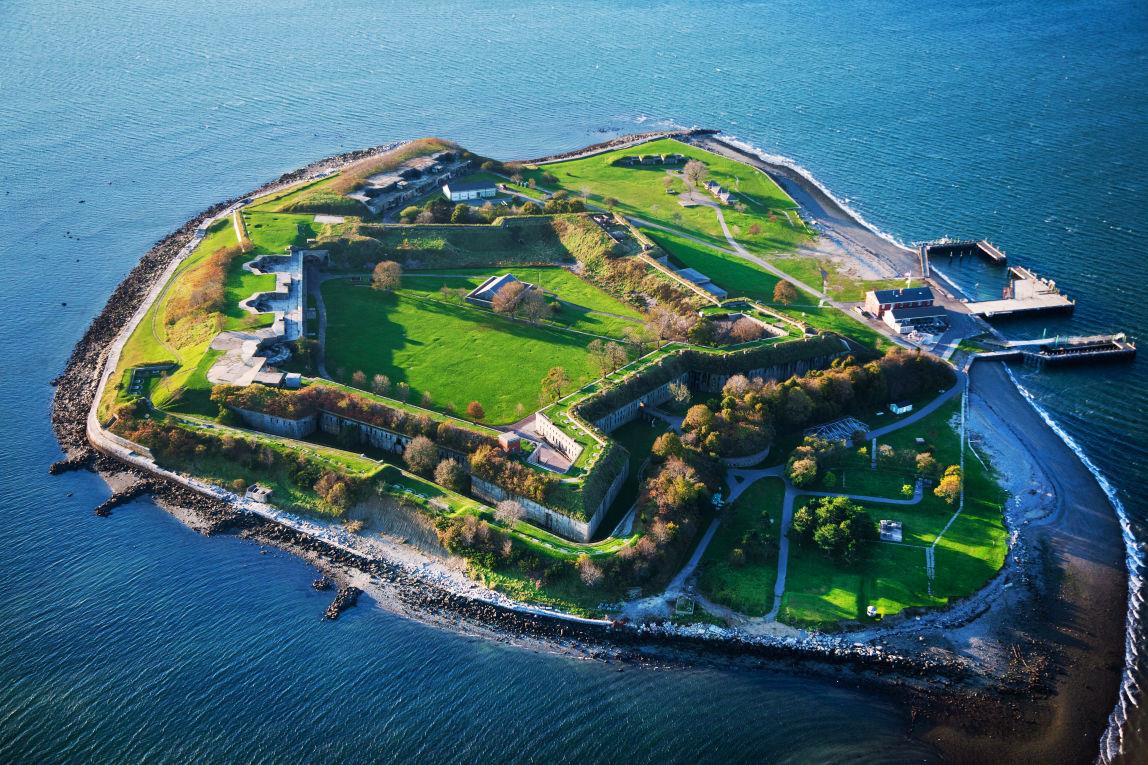 Not Every American National Park experience requires rustic accommodations or hours of driving. Boston Harbor Islands National Recreation area—a collection of Atlantic islands located just off the Massachusetts coast—lets visitors tour preserved forts, climb historic lighthouses and camp in wooded glens all while viewing the Boston skyline. Depart from the mainland and make Georges Island your first stop. Here you can tour Fort Warren, a Civil War-era structure that is rumored to be haunted by the Lady in Black. Enjoy a ranger-led tour, walk the preserved ramparts or enjoy a picnic lunch with beautiful views of downtown Boston. Next, embark on a Boston Harbor Lighthouse Cruise to see some of the nation’s oldest surviving structures like Long Island Light, Graves Light and Boston Light (America’s oldest surviving lighthouse). Hikers can find routes of various difficulty on several of the harbor’s islands, including Paddocks Island (which features Fort Andrews, another Civil War battlement available for touring), Spectacle Island (where visitors can hike to a gazebo that offers 360-degree views of the harbor) and Thompson Harbor (a more isolated island with over 200 acres of undisturbed marshland). Visitors simply looking for a suntan or moment of relaxation can take advantage of the islands’ nearly 50 miles of public beaches. 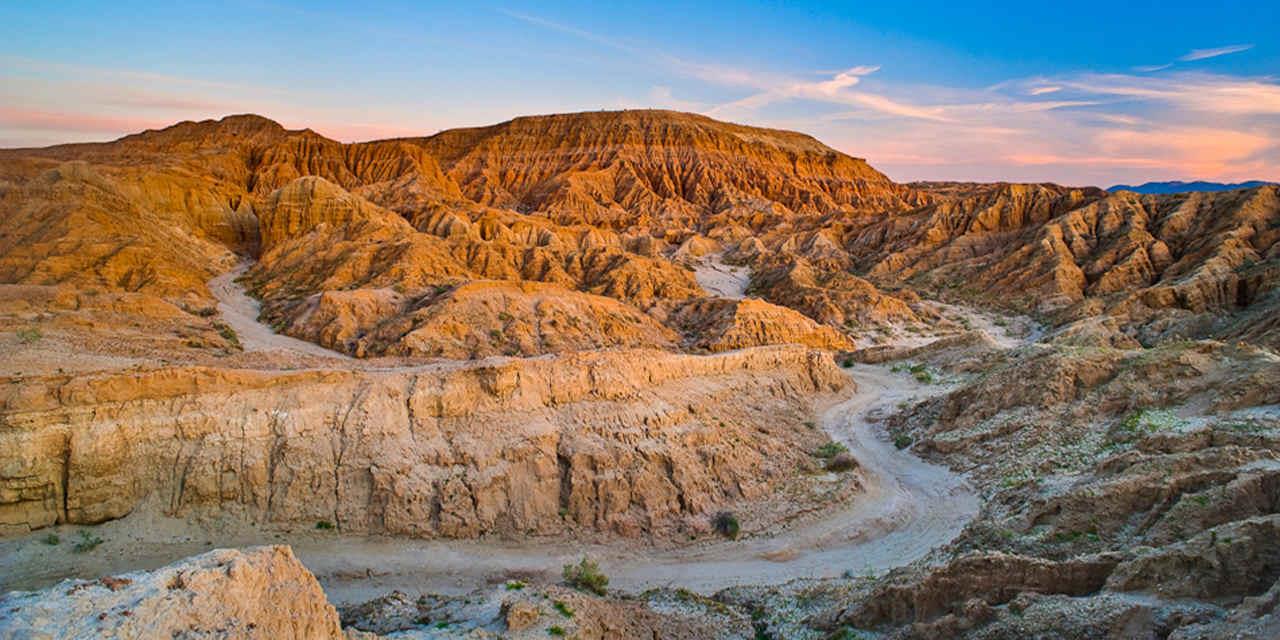 Named for 18th Century explorer Juan Bautista de Anza and the Spanish word for sheep (the park has a thriving bighorn sheep population), California’s largest state park is a stunning 600,000-acre landscape of harsh desert terrain. By day, visitors can hike the 110 miles of hiking trails and explore 12 designated wildlife areas, while at night participating in some of North America’s best stargazing. Despite the harsh climate, the area is known for its diverse wildflowers, which are best seen in the springtime when accompanied with a guide. Designated trail loops can lead hikers through fields of cacti, indigo and ocotillo, while several campsites are located near agave—the monocot plant used to create tequila and mescal.Despite plants, there are other beings growing out of the sandy ground, as the park is also home to over 130 animal sculptures created by artist Ricardo Breceda. Ranging from the prehistoric (wooly mammoths and dinosaurs) to the fantastic (dragons), these enormous creatures dot the desert landscape and are available for photo opportunities.