National Parks in the Mountain West

Theodore Roosevelt National Park in North Dakota is home to striking badlands landscapes that rival its more famous neighbor. Created by millennia of sedimentary deposits and erosion, these geographic landmarks consist of mounds and ridges that create natural hiking paths. Especially popular with groups is the easy Ridgeline Trail, a half-mile route that passes by serene grasslands and bison herds, and the Boicourt Overlook Trail, which is perfect for sunset vistas.

One of the longest and most complex subterranean systems in the world, Wind Cave in South Dakota is famous for its boxwork—intricate calcite formations that have a jagged honeycomb appearance.

Learn about the cave’s role in native Lakota mythology and descend to the Garden of Eden, where rock formations resemble plants and pools. Specialty tours include the candlelight tour, which simulates cave exploration from the pioneer era, and an abbreviated elevator journey for visitors with limited mobility.

Featuring some of the steepest and most dramatic rock walls in North America, the Black Canyon of the Gunnison is so named because the extreme cliffs limit some sections of the gorge to a mere 33 minutes of sunlight a day. The canyon’s craggy spires are best appreciated along the Rim Rock Nature Trail, which passes Gamble oak, sagebrush and beautiful gorges that descend to the Gunnison River. You can also stop by the South Rim Visitor Center to take an unforgettable photo with Painted Wall Cliff as a backdrop. 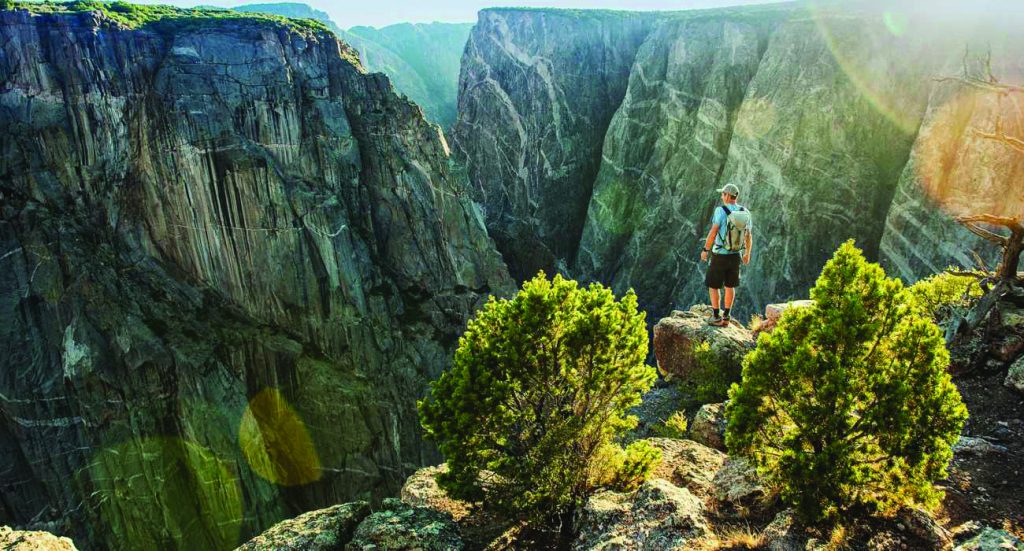 Black Canyon of the Gunnison.

For more mountain beauty in the state, plan a day at Chimney Rock National Monument, an archaeological site left behind by Ancestral Puebloans over 1,000 years ago. Groups can enjoy views of the San Juan National Forest, learn about the hundreds of preserved buildings and take a guided tour of the mesa carved into the rock face. Travel even farther back in time at Dinosaur National Monument in Colorado’s far northwestern corner. Visitors can drive through Carnegie Dinosaur Quarry, where a majority of the specimens were found, you will want to spend time in the Quarry Exhibit Hall, which houses an immense sandstone wall where paleontologists actively excavate and research.

Timpanogos Cave National Monument in the Wasatch Mountains allows visitors to embark on a ranger-led tour up the slopes of American Fork Canyon and through three caves that contain helictite formations created through rivets of water. Utah visitors will also want to visit Capitol Reef National Park in the heart of red rock country. This striking landscape of buttes and monoliths is found in the Waterpocket Fold—a warp in the earth’s crust that dates back 65 million years. Popular with groups is the 90-minute Scenic Drive, which passes by notable landmarks like the Moenkapi Formation (which was created from moist clay 225 million years ago.