No driving required on these iconic American streets that offer historical, culinary and musical adventures.

Designed by renowned architect I.M. Pei, this pedestrian promenade is paved with red, white and gray granite to resemble the skin of a rattlesnake. Nearly 50 outdoor cafes and 200 trees line this mile-long walkway that stretches from Denver Union Station to the Colorado State Capitol. Visitors can go on foot, board a free MallRide trolley or experience a horse-drawn carriage ride after dark. History buffs should stop to admire the 1909 D&F Tower, a two-thirds replica of the Campanile of St. Mark’s in Venice, while shoppers can browse the 40 stores contained in Denver Pavilions. 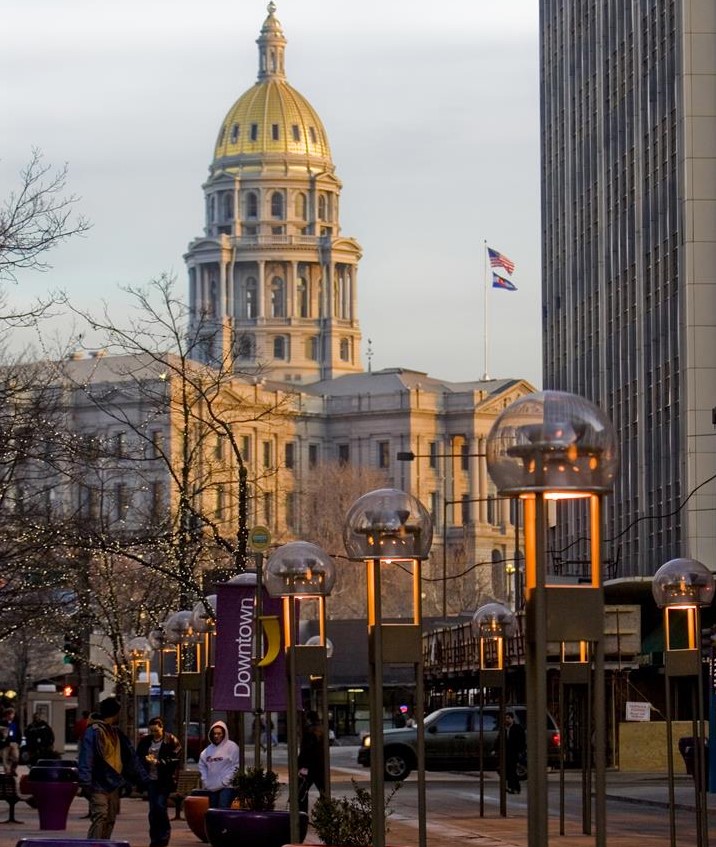 The entire spectrum of San Francisco’s charm is contained in Market Street, which stretches five miles from the winding hillside streets of Twin Peaks to the bustling Ferry Building and downtown area. Begin your adventure at Kite Hill, which offers stunning views of the Golden Gate Bridge and San Francisco Bay, before descending to the Castro District. Intersected by rainbow crosswalks and filled with colorful Victorian architecture, one of the world’s most famous LGBT communities is populated by cafes and theaters ideal for a relaxing lunch or matinee show.

Next, board one of the city’s famed trolleys and embark on a journey through San Francisco’s architectural history. Stops can include the Flood Building (a rounded, 12-story highrise that was one of the West Coast’s first skyscrapers), the Palace Hotel (a recreation of the original after it was destroyed in the earthquake of 1906) and the art deco Central Tower. After passing by modern office towers downtown, conclude with a meal fresh from the ocean in the San Francisco Ferry Building, a restored shipping port and food hall that houses dozens of local seafood vendors.

A beguiling grid of preserved city squares and cobblestone alleys populated by lush vines and oak trees, Savannah is a singular American city. A peaceful port designed by Georgia founder James Oglethorpe, the downtown area was meticulously designed to maximize public space. The most prominent parkway is Bull Street, a thoroughfare that passes by colonial homes, lush plazas and hearty Southern restaurants. 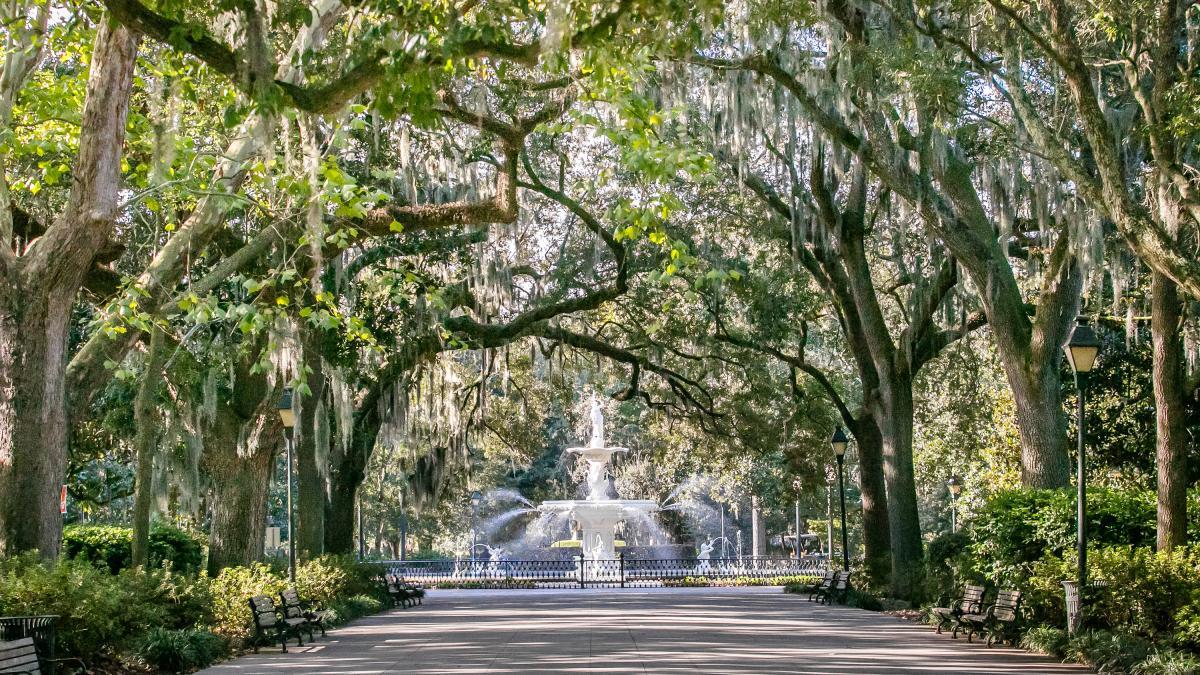 Begin your walk at Forsyth Park to admire the 19th century fountain and colorful gardens before proceeding north to the Gryphon Tea Room. Housed in an old apothecary and featuring relaxing views of Madison Square, this hidden gem allows visitors to experience traditional English tea service like British colonists. From there, leisurely browse independent bookstores like the Book Lady before admiring the restored cotton warehouses along the Savannah River. This rejuvenated district has converted these buildings into quaint brew pubs, boutique hotels and galleries that offer ineffable, relaxed Southern charm.

A thriving port city for centuries, Baltimore’s economic prospects dwindled when its Inner Harbor could not compete with container ships after World War II. Rather than be deterred, the city poured in billions of dollars to revitalize its historic downtown, and the Inner Harbor today is a stunning example of waterfront development. Visitors can easily walk the entire boardwalk that includes a world-renowned aquarium, countless seafood restaurants and colonial history. 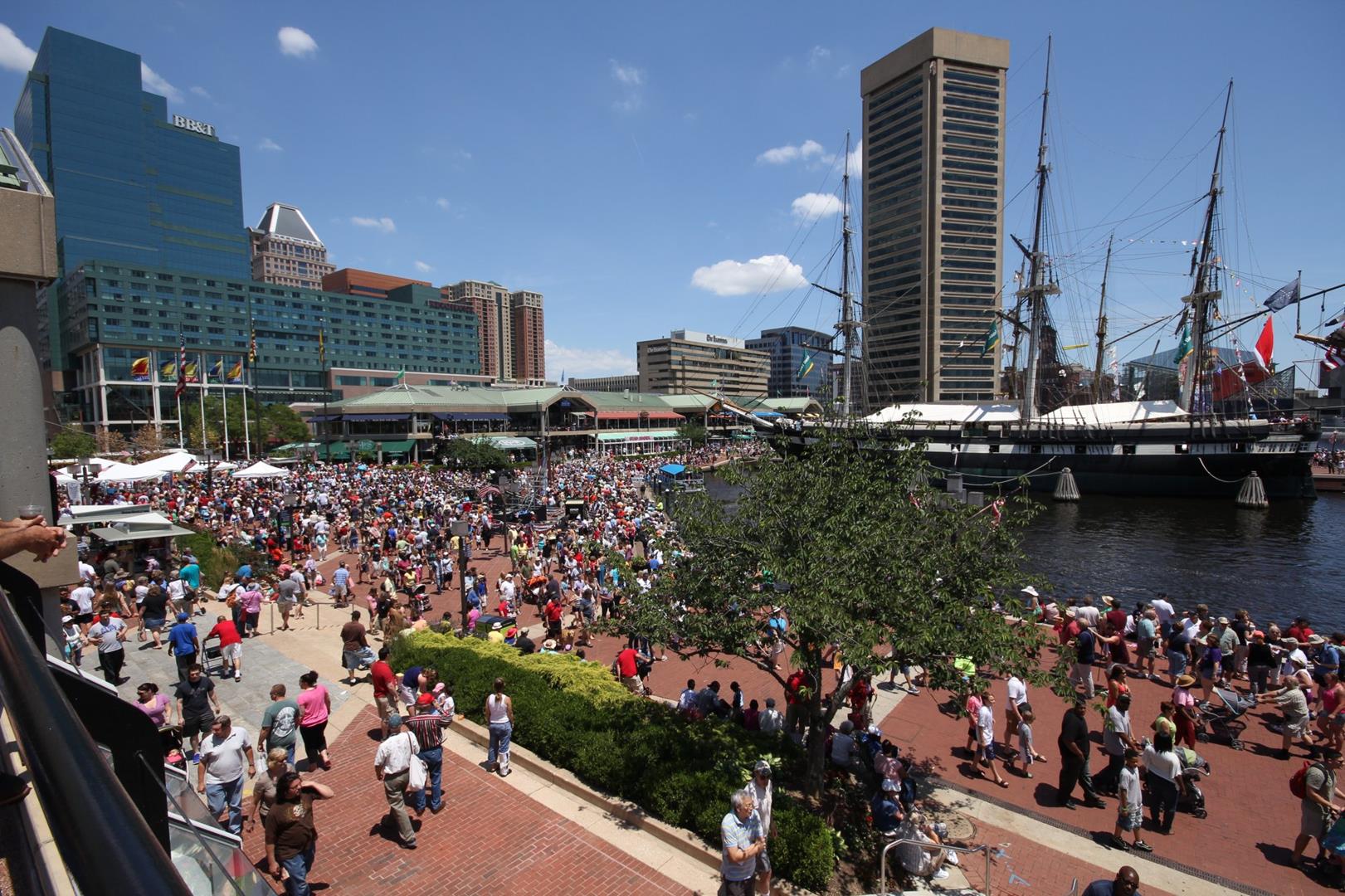 The harbor’s centerpiece is the Historic Ships of Baltimore, a maritime collection that includes the Civil War-era USS Constellation, the USS Torsk (a World War II submarine painted like a shark) and the USCGC Taney, which fought at Pearl Harbor. Considered one of the world’s preeminent aquariums, the National Aquarium houses over 17,000 animals and also features a 4D immersion theater, tactile exhibits and a 35-foot-tall waterfall. Looking for a photo opportunity? Enjoy the panoramic view of the harbor from the Top of the World Observation level or venture to sea on Baltimore Spirit Cruise, which departs from shore and includes delicious food like Maryland blue crab.

Blues legends like B.B. King and Muddy Waters passed through what is now Tennessee’s most-visited attraction. What was once a modest strip of juke joints has flourished into an entertainment district lined with barbecue restaurants, live music venues and neon signs that pay homage to the legendary record label STAX. 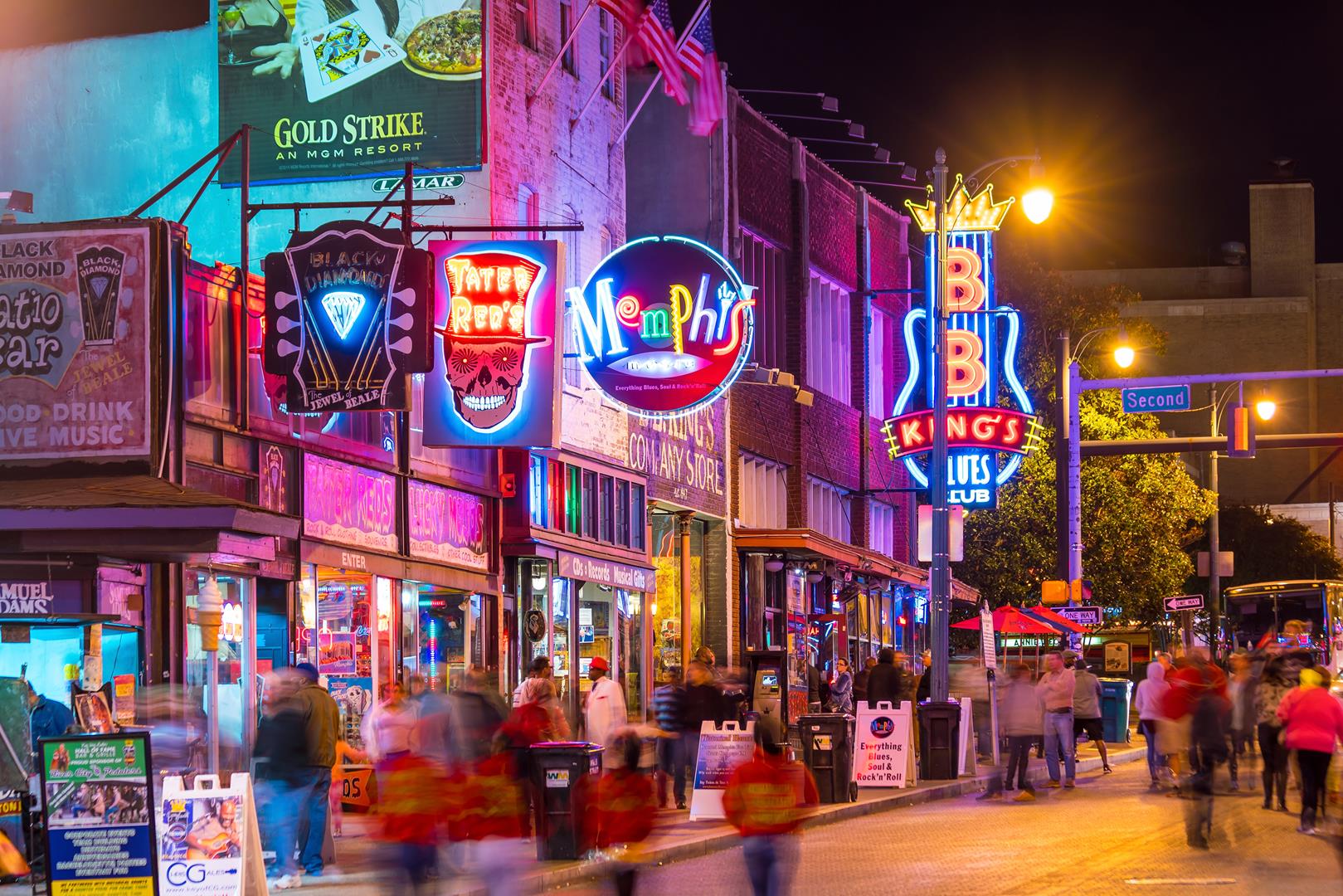 Free concert series are presented throughout summer months, and blues fans can listen to jam sessions in Blues Hall, Rum Boogie Café and Tin Roof. Before an evening on the town, dive into a messy rack of Memphis-style BBQ ribs at King’s Palace Café or shrimp n’ grits at Itta Bena before sampling spiked smoothies at Wet Willies or craft beer at Silky O’Sullivan’s. Sports fans can enjoy a Memphis Grizzlies basketball game at FedEx Forum next door, while riverboat cruises embark for Mississippi sightseeing voyages from Beale Street Landing.

Before Fairfax County developed into a thriving region just outside the nation’s capital, George Washington explored these sloping riverlands as a land surveyor and farmer before becoming an iconic general and president. Washington’s rich legacy can be explored along multiple stops on Highway 235, which winds along the scenic Potomac River. Begin at George Washington’s Mount Vernon, a beautifully preserved plantation and mansion where you can learn about the man’s agricultural innovations, military service and political career. Stops can include the Palladian-style mansion, stables and tombs of George and his wife, Martha Washington. Next, venture along the Mount Vernon Memorial Parkway to George Washington’s distillery, which has been excavated and reconstructed based on the original architectural plans. Attend a tour to see and taste whiskey stilled in the 19th century fashion, and be sure to sample the rye whiskey and hard cider made on the premises.

America’s oldest continuously operating farmers market welcomes over 10 million annual visitors and attracts shoppers with its farm-fresh produce, award-winning restaurants and peerless views of Puget Sound. This multilevel space houses over 500 shops, venues, restaurants and bars, so the uninitiated may want to sign up for a Free Seattle Walking Tour to navigate this multistory Seattle institution. 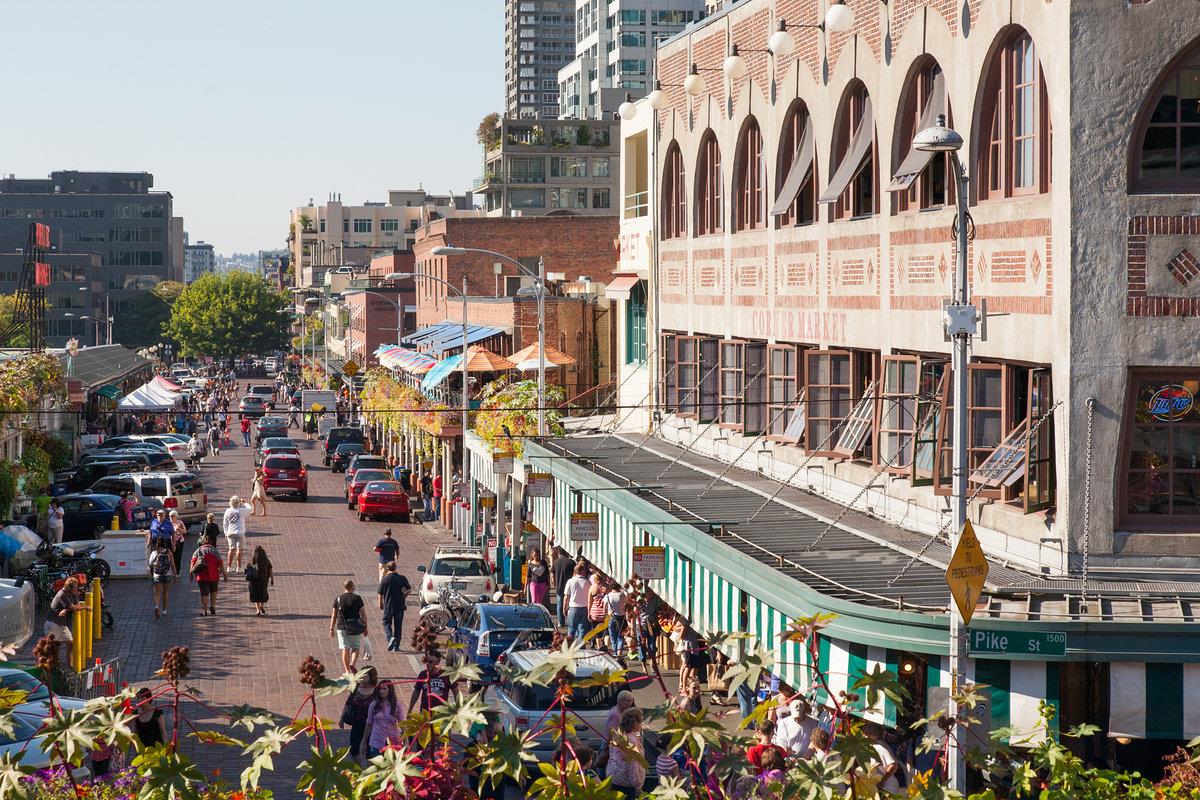 Start with the market’s iconic Fish Market to watch the morning fishmongers toss the daily catch to vendors and the original Starbucks, which has resided in the market since 1975. Sample fresh Washington apples and peaches from local vendors before descending to the market’s second floor for more offbeat shops that sell everything from magic tricks to rare comic books. For a sit down meal, experience the throwback charm of Shug’s Soda Fountain, enjoy fresh seafood at Lowell’s or craft a picnic spread from the cheeses and charcuterie selections at DeLaurenti. For a nightcap, enjoy Mediterranean wines at JarrBarr or sip a craft cocktail on the Urban Gardan Terrace for nighttime views of the Seattle Great Wheel.

Founded in 1565 as a Spanish military outpost, St. Augustine is America’s oldest town and filled with rich colonial history. The epicenter of this Florida city is St. George Street, a pedestrian-only thoroughfare that includes centuries-old Spanish colonial buildings, cafes and charming plazas. Historic buildings available to tour include the Gonzalez-Alvarez House (the oldest residence in Florida and believed to be constructed in 1723), Cathedral Basilica (Florida’s oldest church) and the Oldest Schoolhouse.

Living history awaits in the Colonial Quarter, where you can interact with costumed reenactors, sip fresh coffee from the Spanish Bakery and learn about swashbuckling seafarers at the Pirate & Treasure Museum. St. George Street is at its most charming in the evening, when temperatures drop and lanterns give the walkway a welcoming glow. Listen to live music from the preserved wooden deck of the Castillo de San Marcos, sample craft beer at the Mill Top Tavern or a cocktail in cozy watering holes like the Bull & Crown Publick House or Taberna del Caballo.

Known by locals as simply the “The Loop,” this eight-block stretch is recognizable for its vintage trolley, preserved neon signs, outdoor cafes and St. Louis Walk of Fame, which honors Miles Davis, Scott Joplin and Tina Turner. It’s also the city’s bohemian hub, where you’ll find independent bookstore Subterranean, the progressive alt-weekly Riverfront Times and the Tivoli Theater, which screens cult and foreign films late into the night. 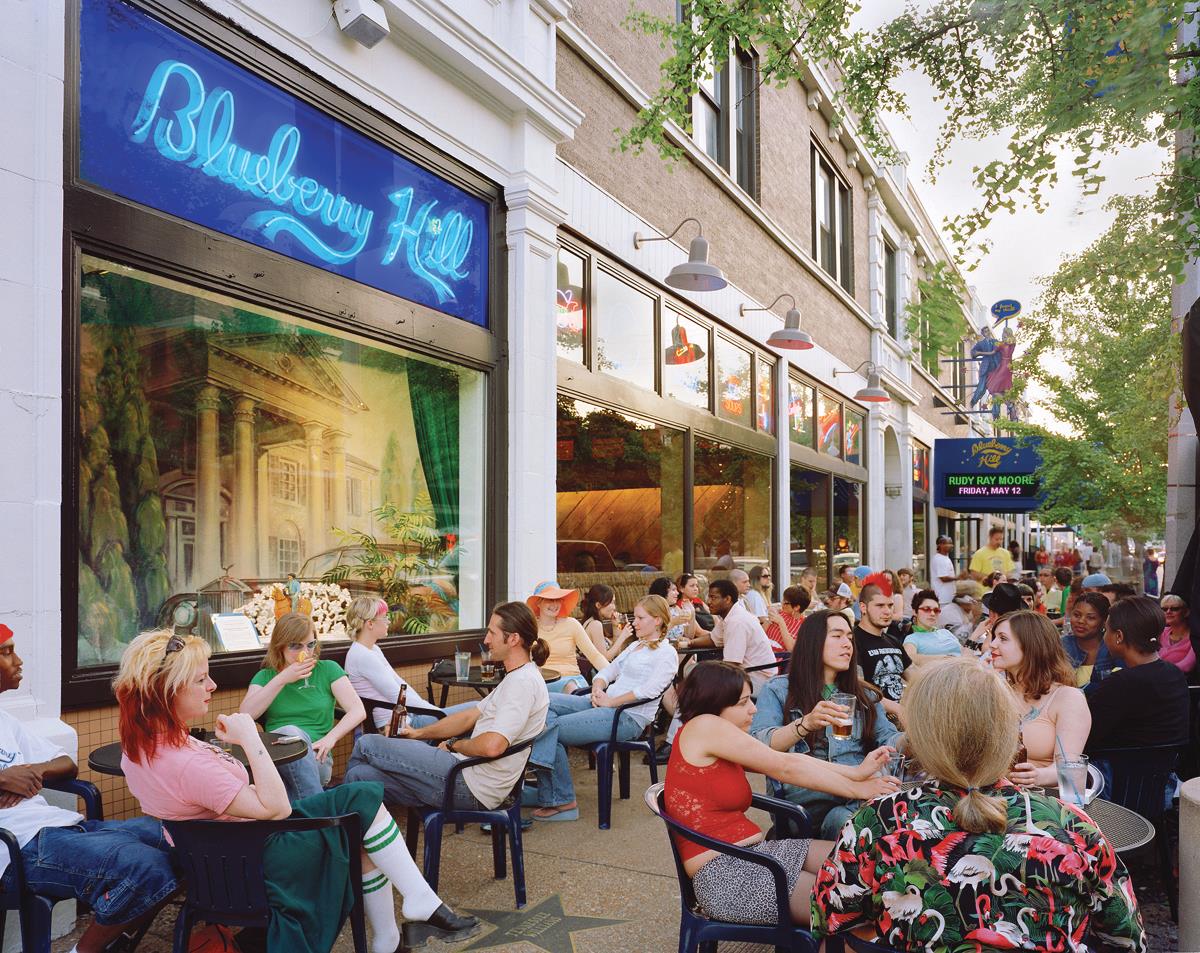 Music fans will want to catch a show at the Pageant (the city’s premier music venue), Blueberry Hill (a music hall and diner where Chuck Berry performed regularly) and Pin-Up Bowl, a bowling alley and martini lounge with retro charm. Window shoppers can browse over 140 specialty shops and those with a diverse palate can try everything from Korean tacos to toasted raviolis in the St. Louis Italian immigrant tradition.

Known for its civil rights history, diverse golf courses and hearty cuisine, Birmingham is a thriving mid-sized city in the heart of the American South. Birmingham’s broad range of cultural and historical contributions can be sampled with a stroll down 1st Avenue, a downtown artery that’s lined with restaurants, bars and boutiques. 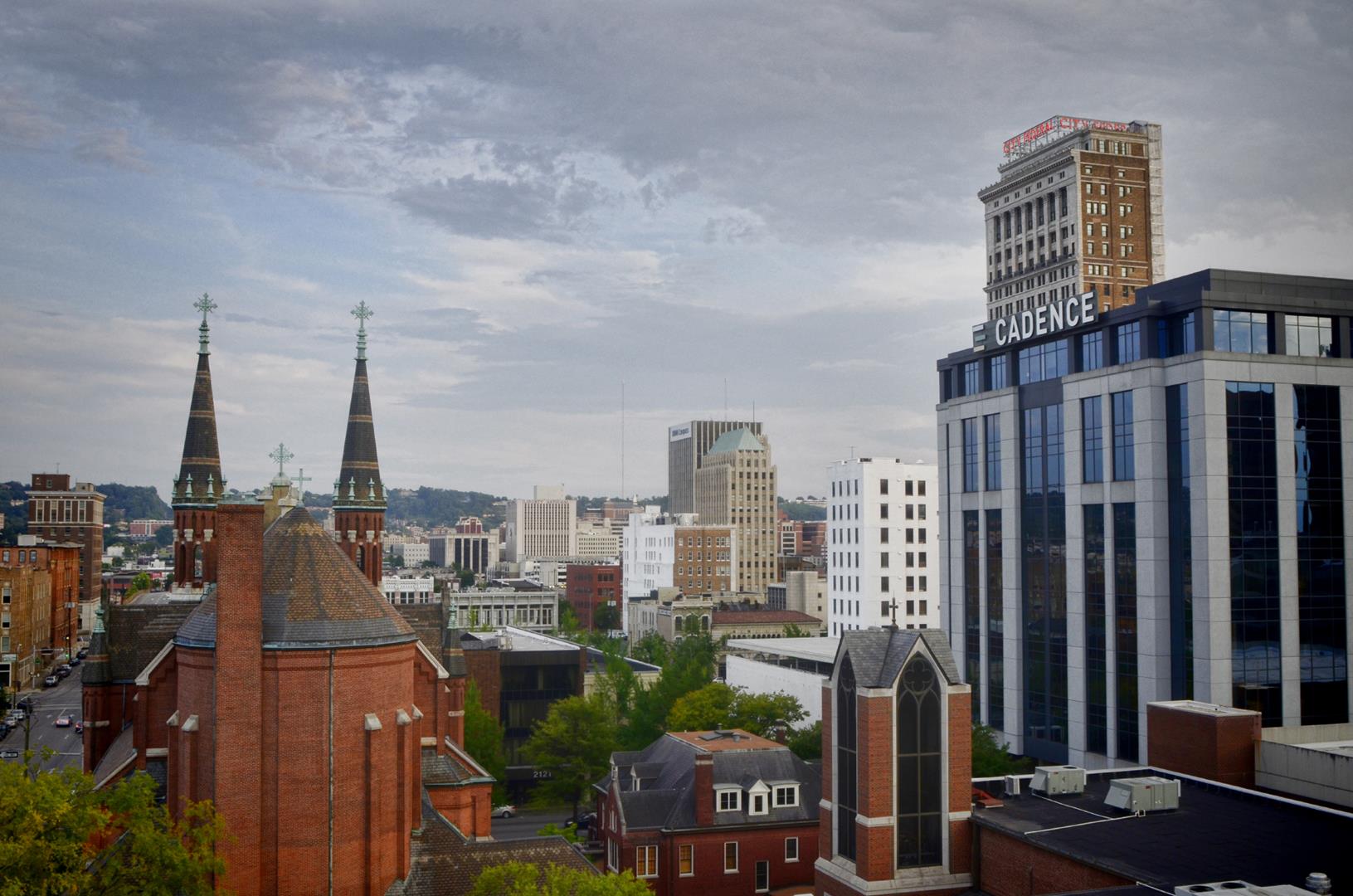 Peanuts are one of Alabama’s largest cash crops, and their many uses are presented at the Alabama Peanut Co., which has been roasting the legumes in the same Morris Street building since 1907. Try their signature $3 lunch special, which includes a bag of peanuts, a Coke and a Southern favorite—a Moon Pie. Nightlife also abounds; take in a skyline view and glass of wine at the Moon Shine rooftop bar, small-batch tequila at Pilcrow Cocktail Cellar and craft beer at the Atomic Bar & Lounge—a throwback to mid century dive bars.
By Miles Dobis